Winter Steelhead are a distinct run of Steelhead that arrive to their home rivers during the months of December, January, February, March and leave during April.

As a general rule, Stamp river fish start entering the river around the first week of December and continue until late March. 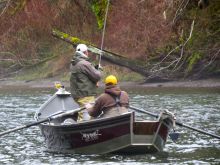 You will be coached by Experience & Passion

Sharp hooks is only the tip of the iceberg when it comes to your trip.

Murphy Sportfishing guides have guided guests to more than 15,000 Steelhead in the past 15 years and have earned the reputation of being the premier Steelhead guides in British Columbia. We have 5 great guides that live and breathe this river and they are unsurpassed for the expertise and knowledge of the art of Steelhead fishing.
The Stamp River can be divided into three sections: Upper (above Stamp Falls), middle (above the bucket) and lower (below the bucket). Starting September 15th bait may be used in the lower river, which is the bucket down. Bait may not be used above the bucket, which includes the middle and the upper part as described above.


If you haven't Steelhead fished come out and we will teach you the ins and outs that will set you up for a lifetime of enjoyable days on the river. For those of you who come every year, we look forward to some good times catching winter Steelhead.
365 Days A year...
1.877.218.6600
We Live to Fish & We fish to Live
Facebook Twitter Instagram
Fishing Report
Photo Galleries
Sign-Up to our Newsletter
Location
mouse over to zoom in